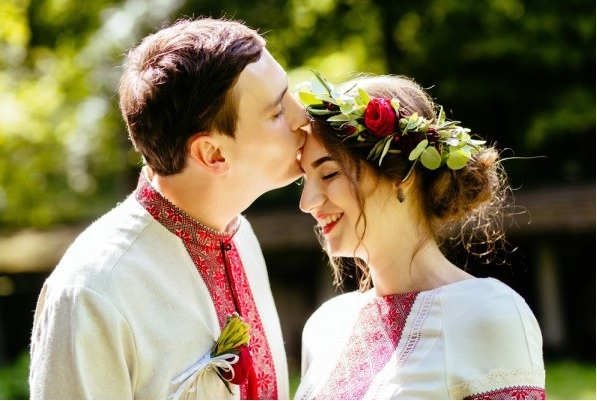 The concept of marriage often is considered to belong to the most sacred things in humanity, along with the first religious experience and birth of the new life. Needless to say, every culture has accumulated a set of rules and customs to initiate the start of couple’s life as one whole. Let’s look at the traditional wedding in Ukraine, which unravels many cultural layers and secrets.

Ukrainian wedding is made up from a whole lot of traditions, and if some of them date back to several centuries ago, others came all the way from the ancient times. Naturally, most of the traditions that are inherent in modern weddings are very different from the latter. Some of them, however, people managed to save till nowadays. For instance, the tradition of pouring wine and breaking the glass ‘for the fortune’ originates from the Slavic god of the Sun.

Pouring a drink, we subconsciously make a sacrifice to the Sun, and breaking the glass symbolizes that no mortal can ever drink from the bowl the Sun drank. In the pre-Christian period, Ukrainians married in the spring. It was considered the most favorable time for the formation of a new family. With the advent of Christianity, this tradition has changed because of the Great Lent. Moreover, until 19th century the church marriage was only a legal necessity — thus, young people could live separately for a few years before they finally celebrate the wedding.

Ukrainian wedding ceremony was – and sometimes, still is – more of the theatrical performance than a strict ceremony. The permanent ‘cast’ consists of the future couple, their parents, groomsmen called ‘boyary’, bridesmaids called ‘druzhky’, and guests of the wedding. Typically villages had their own zealots of the wedding ceremony, who guided the course of the action. Each participant then had to know what to say and when to sing. Given that the whole village was invited to wedding, along with the bride’s and groom’s relatives, no wonder the wedding ceremony began much earlier and ended much later than just the wedding day. Now, let’s take a look at the stages of the typical Ukrainian wedding. 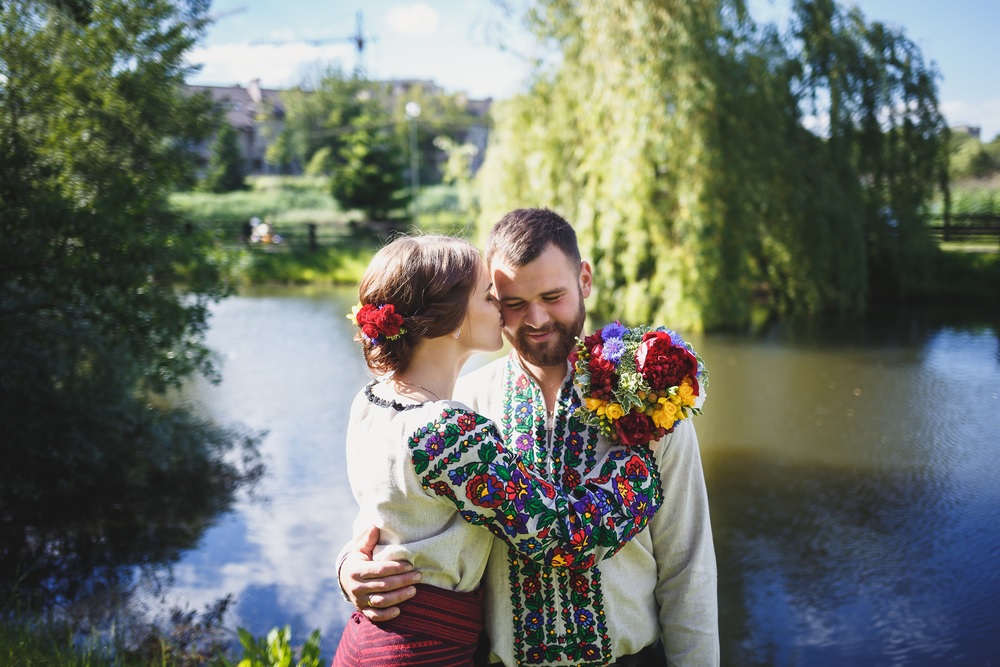 Everything started with engagement — sometimes the parents arranged it themselves, but more often the young man and the girl agreed beforehand, and then informed their parents about it. A future groom along with his uncle (or his father, or a respectable man in the village) went to the girl’s parents to negotiate the time of matchmaking. If the girl’s parents didn’t like the candidate, they refused or set up conditions.

If everything went good, then was the showing, or ‘ohliadyny’ — the young man’s parents went to the girl’s house in order to see the household, assess the wealth of the future bride and meet her parents. The girl had to present the best version of herself, be hospitable with the guests and prove that she would be a good hostess. If the young man’s parents were not happy with what they saw, they could forbid their son to marry this girl. 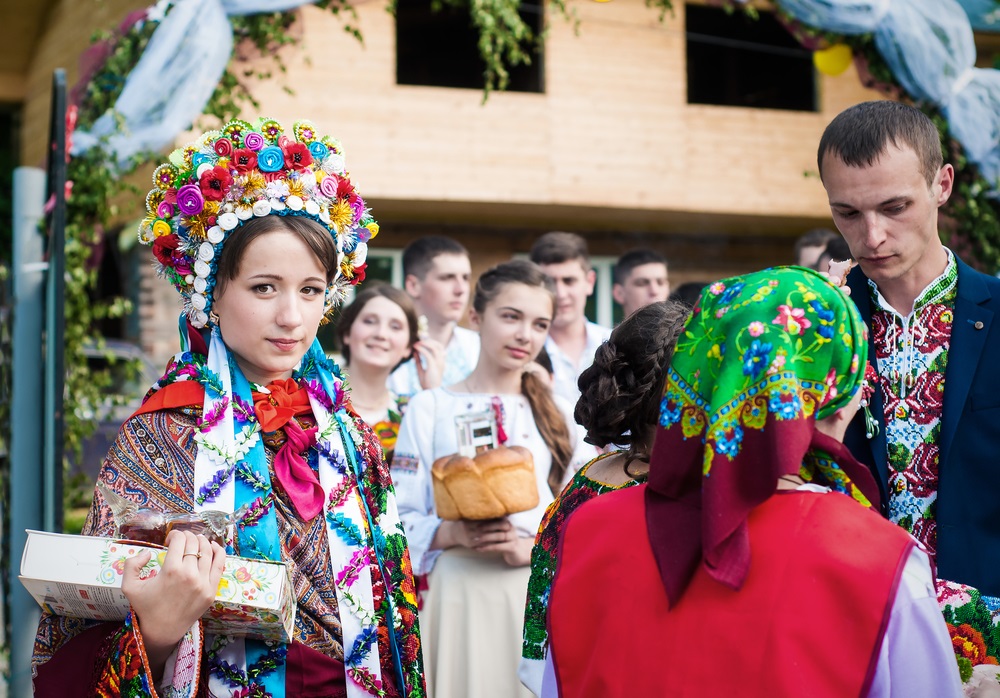 Next one of the most well-known ceremonies in traditional Ukrainian wedding happened – matchmaking. The groom picked matchmakers among his closest friends, who then went to the bride’s house to make a preliminary marriage agreement. The date of matchmaking was kept secret, as well as the route the messengers chose to get to the goal. It was believed that the faster the matchmakers make it from the gates to the girl’s house, the sooner the parents will consent to marriage. Often matchmaking didn’t end in anything from the first try.

This did not mean, however, that parents were against the marriage. Sometimes they simply did not want to hurry to give their daughter away. If the girl herself doesn’t consent to marry, she brought a pumpkin to the one who wished to marry her as a token of refusal. If everything was alright, it was the time for the young man’s parents to come over for the matchmaking. They discussed the wedding, expenses, dowry of the bride, her responsibilities in the new family. 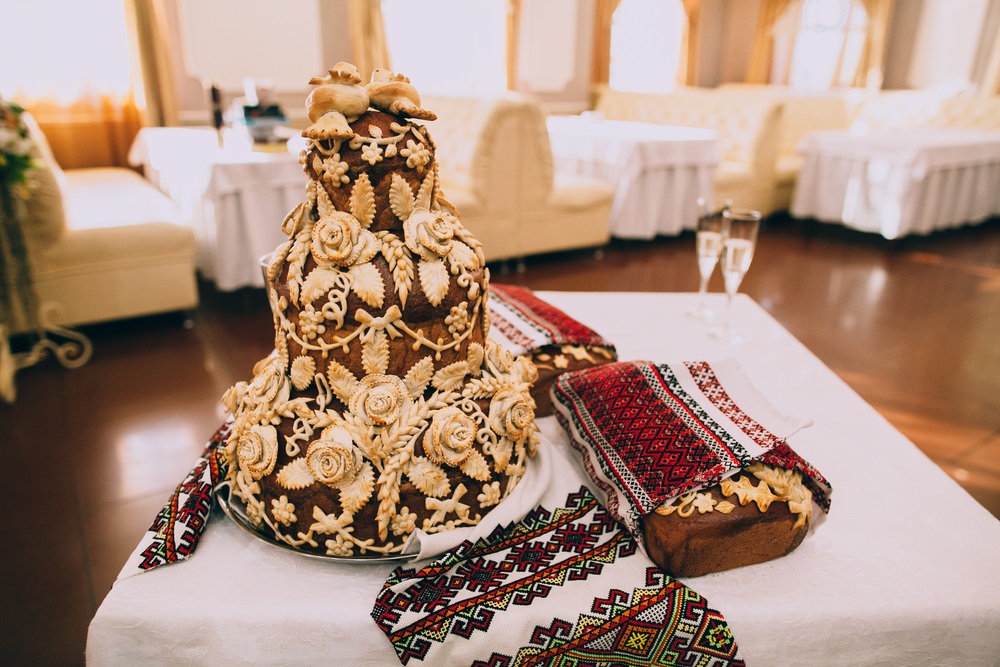 Preparation for the wedding usually lasted a long time. Thus, the bride’s family cleaned the house, prepared the dowry and cooked food – up to twenty dishes. Among them was the traditional Ukrainian wedding cake – Korovai. It was baked both in the houses of the groom and the bride. Families invited korovainytsi – three to seven young, happily married women. Curiously, women who weren’t married well couldn’t take part in this ceremony – according to the wedding superstitions in Ukraine, the bride then would be divorced or widowed. Korovai was decorated with periwinkle — a symbol of eternal love, and kalyna, which symbolized the woman’s ability to give birth.

On Saturday morning, the bride and chief bridesmaid invited matchmakers and groomsmen to weave the hiltse — a tree branch, decorated with flowers, ribbons and various herbs. It was then stuck in the fresh bread that traditionally was among the dishes of the Ukrainian wedding. On the evening before the wedding, the bride said farewell to the unmarried life. Her friends gathered at her house and sang songs about beauty, youth and the future good-byes to the parents. 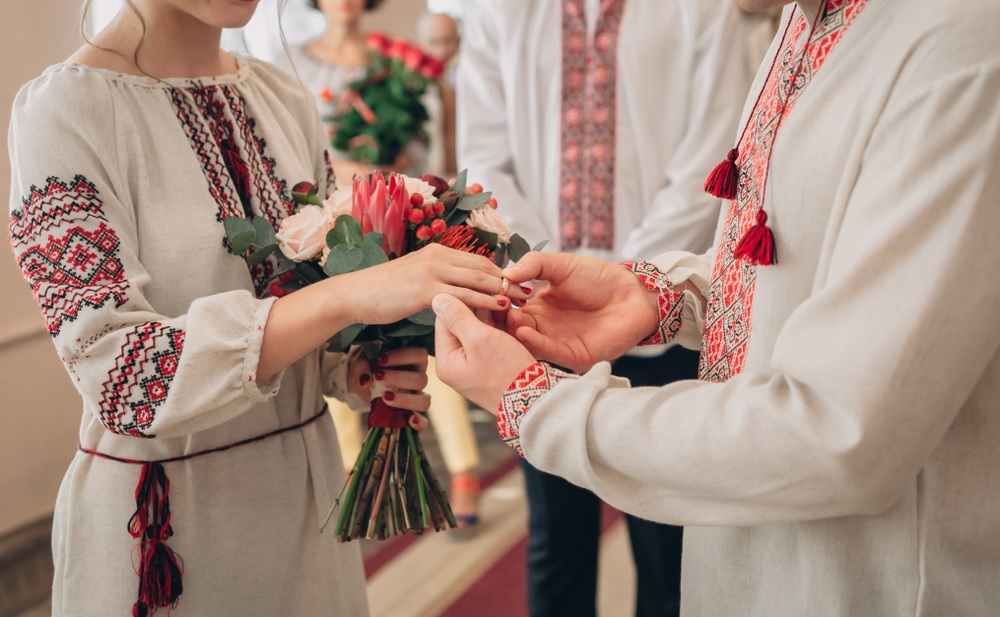 Finally, it was time for the wedding. It usually happened on Sunday. In the morning, the bride was preparing for marriage: her braids were undone (often by her brother), friends put in coins and colorful ribbons in her hair. Garlic was traditionally put in the Ukrainian wedding clothing as a symbol of protection. Throughout the centuries-old history, every detail of the garment was made according to the folk traditions. It was meant to serve one high purpose: to protect the spouses from evil forces, provide happy future.

Traditional Ukrainian dress worn by the bride and the groom’s garments differed from region to region, but in the end each wedding clothing was meant to show people the couple’s honesty, skills in work, and thus to testify to their maturity and readiness to create their own family. When the young man came over to the bride’s house, the bridegroom stood on a towel, which symbolized that life would be long and smooth. The parents blessed the couple, crossing them with the icons three times. 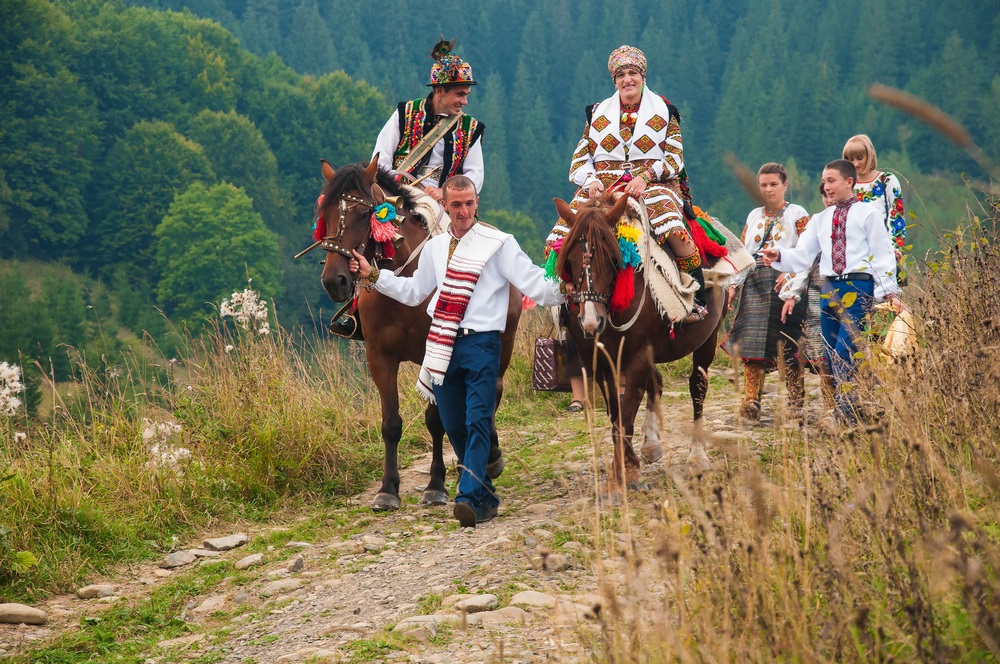 Having received the parental blessing, groom and bride, along with the whole marriage procession went to the church to marry. Traditional Ukrainian songs were performed all the way until the wedding took place. After the ceremony, the newly-weds returned to the husband’s house for a meal. They were met with bread and salt put on a towel. Similar ceremonies meant to unify the family lasted for a long time.

Finally, after the first month of a married life, the final wedding ceremony was held. It has a unique name in different regions — Kalachiny in Hutsul region, Dyaka in Lviv region, Khliba in Volyn, and Vytratnyi Borsch in other regions. A young man invited his parents and his wife, as well as other relatives, to an abundant feast in honor of the prosperity of their family and household. Ukrainian wedding presents also carried symbolism — traditionally, the smith of the village would give the newlyweds a horseshoe as a talisman for the wealth, luck and fortune. Sometimes the gifts included scissors — its two halves working as one symbolized the new family. Curiously, the gifts weren’t meant only for the bride — during the wedding ceremony, groom gave scarves or decorations for bride’s sisters, and traditional Ukrainian boots for the mother-in-law.

Naturally, not all regions of Ukraine have the same traditions, but the main ceremonies have been passed through the years and even centuries to be revived nowadays.
Photo source: shutterstock.com. All images belong to their rightful authors.